Building a legacy one countertop at a time

Stephen J. Paxton first learned how to fabricate countertops in the late 1970’s with his brother-in-law, Bill Luoma.   He had a gift for working with wood and other materials. He began fabricating custom cabinetry as side work from his carpet installation business, which he started when he was 17.  At first, he only took on projects for friends and family; however, family and friends quickly grew into referrals as well as a growing list of builder clientele. Before long, this was a full-time business.  From day 1, his wife Jane has overseen the finances, all while raising their 3 children, going to school and teaching dance lessons.

The first workplace for Paxton Countertops was in the garage.  But this soon spawned the need for a pole-barn, constructed on the property of the Paxton home on Eaton Hwy in Grand Ledge. In the early 90’s, a larger shop was built on Royston Road, which itself was expanded, due to the continued growth. The Paxton residence served as the office and showroom, until 2011, when a showroom and office was opened at 317 S. Bridge Street in downtown Grand Ledge.  Simultaneously, the Paxton stone shop opened on Lawson road in a building once housing a brick factory.  Being spread out between these three facilities, logistics often proved to be a huge hurdle. It was decided that clients would be best served by housing all fabrication and sales under one roof.  This became reality in “the Big Move” in December of 2014 to the current location at 1340 S. Waverly Rd. in Lansing. 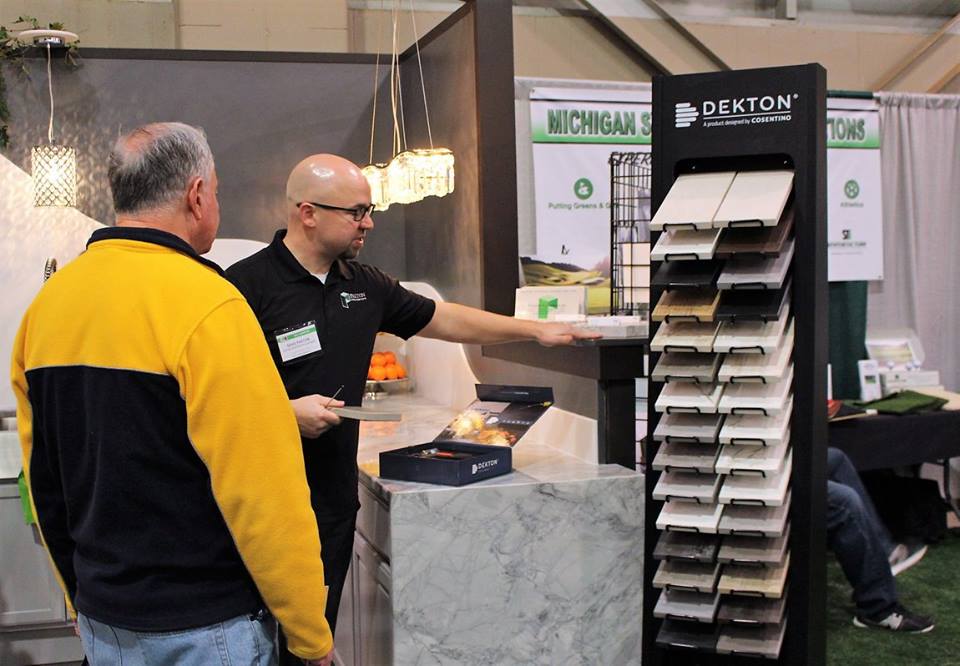 Just as the workspaces continued to evolve, so too did the products fabricated by Paxton Countertops. From its humble beginnings in laminate countertops to custom fabricated solid surface showers, the list of materials and products continued to grow, including granite, marble, soapstone, quartz, and most recently, ultra-compact.

At Paxton Countertops, our customers are the center of our universe.  We manufacture our countertops at our own manufacturing facility, assuring the utmost in quality control and a fair price.  We take care of your countertop needs from sales to template, fabrication & installation.  All steps of our proven-process are provided by a trained Paxton team member and never a subcontractor.  We strive to make every experience an exceptional one.  History proves that we are trustworthy, and our reputation speaks for itself.  With 40 years in business and a combined experience of over 275 years, our goal is for you to be thrilled and excited.

Find out how Paxton can help transform your home!